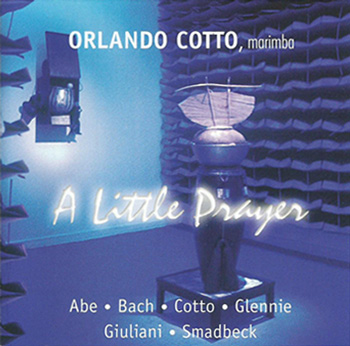 Back to cd albums

The Journal of the Percussive Arts Society Vol. 40. No. 4 August 2002 Orlando Cotto, Marimba Cotto opens this recording with his own arrangements of music borrowed from two sources that have often been raided  by marimbist the repertories for the classical guitar and solo violin. In fact, the first then tracks of the CD (approximately half of its playing time) are devoted to the 19th-century guitarist Mauro Giuliani’s “Variations on a Theme of Handel, op 107” and J.S. Bach’s “Sonata No. 2 in A Minor” for violin. The former will be immediately familiar to many listeners, who will recognize the well-known “Harmonious Blacksmith” theme. The most striking features of Cotto’s adaptation of the Bach are his transposition of the work to B minor an his predilection for the marimba’s lush, lower register, which results in his setting of the original a seventh below written pitch. The remainder of the disc is devoted to pieces that will be of interest to all student marimbists: Paul Smadbeck’s Rhythm Song” “A Little Prayer” by Evelyn Glennie and Keiko Abe’s “Michi for solo Marimba.” Two Cotto originals complete the list the composer’s “Hand on Wood” and his “Despedida ‘Farewell‘.” The first half of the CD establishes Cotto’s credibility as an accomplished musician. In the remaining portion, he, “lets his hair down” and the listener in the beneficiary. He puts his hand drumming abilities to work in “Rhythm Song”, adding a tastefully conceived with the Tumbadoras and batajones. In “Hand of Wood” he turns the marimba into a “drum” and plays the piece entirely with his hands. The pieces by Abe and Glennie offer contrasting musical opportunities that Cotto with an homage of sorts to the composer’s roots “Despedida“ ‘Farewell’,“ which conjures up scenes of the Puerto Rican rainforest. Cotto’s interpretation of the interesting musical program found on the CD should be particularly interesting and relevant to all serious college marimbasits. -John R. Raush